Neil Warnock's team went into tonight's game needing a point to be certain of not needing to wait on the outcome of Wigan's appeal against their 12-point deduction.

Boro started brightly with some good moves that were often started by the energetic Tavernier, including one where McNair hit the woodwork, but they fell behind against the run of play to a deflected shot that looped over a despairing Stojanovic. However, Boro were soon back on terms after another neat interchange between Fletcher and Tav to setup McNair.

Strangely the equaliser saw Boro lose their fluency and the game became more scrappy, which seemed to favour Wednesday. Indeed, the second half continued in much the same manner as the first ended with neither side able to impose themselves to create clear-cut chances.

Although the result at Hillsborough became academic once it became clear Charlton were facing a thrashing at Leeds as Boro followers became passive observers of their own fate knowing their team's result was now of little consequence in the grand scheme of things.

So Boro then made everything safer than the safest of safe words as Britt scored a late winner - it wasn't in the end the tense night it could have been and at least Neil Warnock beat his old rivals too.

Phew ! Well done NW. Sign tomorrow for another year. Thank you to Leeds too.

Big sigh of relief from here along with a chorus of Pig Bag from behind the sofa!

how hard has that been then? My daughter has just said that she can’t remember a season she has enjoyed less even when we were relegated.  The virus certainly hasn’t helped.

i now predict that Wigan will be deducted 10 points on appeal!

Well I am pleased that is all over for a couple of months at least.

Well I'm glad the season is over, we have had to suffer, endure some sopporific football. Not winning at home for 10 matches is not acceptable. I dont think I can cope with another season like that and I know it is a first world problem.

Great win, well done NW and the players.  Awful season but the next few weeks will be very interesting.  The fun starts now! 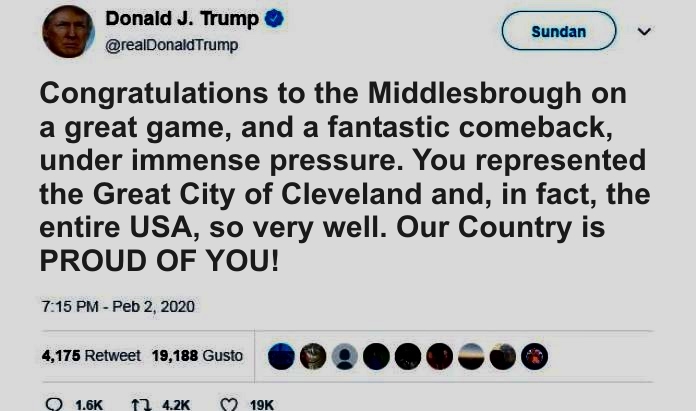 Good luck to anyone who forecast that set of results. So many positions could have been different due to the results from the very last game.

Ultimately our result was academic but a win feels good. It was still a bizarre way to end the season; four home defeats and four away wins. I’m not sure what it says about the team but we can now look forward to a complete rebuild starting with a group of talented youngsters and only four or five senior players.

.....forgot to mention that today (July 23 already in Oz) is my birthday so thanks to MFC for exactly the present that I wanted 🙂

17th! Comfortable, what was all the fuss about? LOL.

Well, since NW arrived we've been in play-off form, so play offs next season and NW to be first manager to win at Wembley with Boro!

Well, I forecast a 2 nil win Boro, so not far off.

I hope now that NW is our next full time manger.

How many times now is it we have come back from behind away from home.

A season to forget and thank goodness SG had the sense to bring in NW. I think that if JW had remained, we would have been down and out. The way we have played at home v away has been very odd but the lack of a crowd  has an impact on home teams for some reason.

Given that it may be a while before crowds are allowed back in, some work needs to be undertaken to get the players in the right mind set.

The close season fun and games now begins, starting with a manager.

Yet another rebuilding project to commence, now where have we heard that before?

UTB the Boro’s staying up!!

I don't know what some BORO supporters were worrying about. We have finished not far from mid-table.

I think I will go to bed now to allow my finger nails to start regrowing.

Not a classic game but one that we will remember for all the wrong reasons.

NW to stay and lots of players to come and go.

A good picture on Instagram of Adam Clayton jetting off on holiday today. Oh but wasn’t it an unfound rumour that I posted that he left the club on Friday?

@original-fat-bob I think we need to move on from all that and celebrate survival. Imagine being a Latics fan tonight.

Big sigh of relief from here along with a chorus of Pig Bag from behind the sofa!

how hard has that been then? My daughter has just said that she can’t remember a season she has enjoyed less even when we were relegated.  The virus certainly hasn’t helped.

i now predict that Wigan will be deducted 10 points on appeal!

If that happens the EFL can expect a lawsuit by Barnsley although they could reduce it to eleven points.

Adam Clayton putting his side of the story

You seem hell bent on pursuing this OFB. However, I was under the impression it was the Woodgate rumour that was called into question.

Time to put it to bed.

Clayton sounds a bit upset at being let go and he really sounds as if he loves the club. Part of me wanted him to stay although it would have been on a heavily reduced salary. I think that he would be a great buy for Sunderland.

Now that only leaves Friend and Johnson. How about a one year contract for George as cover combined with a broader role at the club? Johnson is worth another couple of years.

@grovehillwallah no it was the Clayton post that was put into question and demanding to know where I got the information from.

Yes I’ll put it to bed now but my post was proven to be correct.

In the end it was all about survival and somehow against all the odds Redcar Red has managed to get through another very difficult season without losing the will to live - here he is with his final match report of what has mostly been a difficult season to watch...

TypicalBoro winning that game and not fighting back from 4 - 1 down to win 4 - 5 in the last minute! A slight headache this morning after 3 San Miguels but delighted. Now the real hard work starts starting with a manager, re-orgamising finding the right players and not losing some of the promising and talented young players. That'll be nice and straightforward.

I think I'll take a drive to Martin and let the two terriers find OFB and give him a lick to complete his season, they can do a lap of Stewart's Park together! GHW, loved the news from the USA too. Excellent.

Phew! It wasn't quite the 'fever pitch' and triumphal high drama of the last day of the 1989/90 season, but it turned out to be a job (messily) well done, featuring a side lacking in confidence and ability but having the heart and spirit to see it over the line. I was especially pleased with the grit and sheer heart of George Friend, an inspirational figure in defence, saw all sides of Dael Fry but he made some important interventions, had my heart in my mouth every time Stojanovic was called on to make a catch, and sort of saw the point of Assombalonga, coming good after a match in which he seemed determined to show his worth by falling over, a lot.

The salient points were Boro's bench, a paltry six subs after the trimming away of players (including poor Clayts, a shadow of what he once was but it appears to me a sad and slightly shabby end to his time here), and the fact we won without ever needing to call on the on-loan talents of Roberts, instead having the emerging Tav as our main attacking thrust.

Well done to Werder and Redcar Red for covering the game. It wasn't pretty viewing, but at least we did enough not to rely on other teams falling foul of points deductions, and hopefully the turnaround in our fortunes starts here. Much to do, very much, but there's the nucleus of a team here and with some careful recruiting something on which to build.

Well, most of the results went our way. Especially at Wednesday. So happy days for a while.

It will be interesting close season - I think it will be just five weeks or similar. The action should start again in early or mid September.

So in that time we should have a new manager, a head of recruitment  and some new players. We need two or three leaders on the field and about five to seven new players minimum.

It won't be a close season as we know. I think NW will be off to a holiday on Friday. Will he be back as a manager after the trip? We should know today.

This post was modified 3 years ago 2 times by jarkko
Liked by Ken Smith, Malcolm and Original Fat Bob
ReplyQuote

@grovehillwallah no it was the Clayton post that was put into question and demanding to know where I got the information from.

Yes I’ll put it to bed now but my post was proven to be correct.

Sorry OFB, I'm only dipping into Diasboro while on holiday and I would also like to draw a line under this but this is getting a bit over the top. You keep asserting people didn't believe your Clayton information and have now posted half-a-dozen times to prove you were right.

So to be fair to Exmil or anyone else on the blog, I think you had initially misread his post as at no point did he or anyone else question your Clayton information - he only expressed doubt on your assertion that Woodgate was in line to be appointed Head of Recruitment.

In fact the only post I can see that cast doubt on your Clayton information was your own in response to Exmil's Woodgate post...

I was told by a current member of the first team who said that Clayton had said his goodbyes on Friday and was gutted apparently.

Apparently Woodgate is to be made head of recruitment for the Boro !

You couldn’t make it up could you ?

OFB would you mind posting the link where you got this information as I cannot find anything anywhere to substantiate this comment. We all hear rumours from “a friend of a friend who lives down the street of the tea lady” but on this blog I thought we only posted credible reports or rumours that are in print.

OK, I'm now drawing a thick red line under what appears clearly to have been a misunderstanding - OK Exmil could have perhaps phrased his post better but at no point did he cast doubt your Clayton post.

Right I don't want to see anymore posts on this matter as Diasboro is not here for points scoring - let's move on.

.....forgot to mention that today (July 23 already in Oz) is my birthday so thanks to MFC for exactly the present that I wanted 🙂