@forever-dormo More wise words. Mental health generally is a tricky subject but, fortunately, society is at least become more open about it.
The days when people described those who take their own lives as “cowards” have largely passed and I, for one, can’t help but feel sadness that anyone reaches that point.
Men, in particular, are prone to bottling up issues rather than talk with others and the more we can do to encourage this openness, the better. Andy’s Man Club has done lots of good work in this area - https://andysmanclub.co.uk/

Many thanks for the preview, OFB. Much appreciated as always.

Wilder talked about Nathan Wood at some length in his pre-match press conference yesterday.

He said it’s a two way thing and Wood needs to stop and think why he didn’t make more first team appearances.

He also said to take it on board and get back to being determined to be part of the Boro first team squad when the numbers are revised in January.

Boro’s record at Huddersfield has been quite good since 1983 with 5 wins, 3 draws and 3 defeats since 1983 but it wasn’t always thus with only 4 draws and 9 defeats from 13 matches from 1957 all in the Second Division. However the match I remember is the home match on the 30th September 1950. Boro started with a Wilf Mannion penalty in the first minute, and Wilf scored again in the 6th minute before completing his hat trick before halftime followed quickly by a Johnny Spuhler goal. But that wasn’t the end of the scoring as Alex McCrae scored a hat trick of his own in the second half before Geoff Walker got on the score sheet in the last 5 minutes. Not only was this Boro’s record win ever in the First Division, but two ‘proper’ hat tricks, by that I mean 3 successive goals without any other player scoring in between as Boro reached 2nd place in the league.

I remember running after the final whistle to catch the bus back to Redcar as an old lady standing on her front doorstep asked me if the Boro had won. In those days one couldn’t get the final scores until the signature tune of ‘Out of the Blue’ heralded the start of ‘Sports Report’ on what was then known as the ‘Light Programme’ on BBC Radio. As I kept on running I shouted that Boro had won 8-0, and she obviously didn’t believe me as I heard her ask someone else seconds later.

By Christmas Boro had a 3 point lead at the top of the League as Boro beat Newcastle 3-1. Sadly it didn’t last as Boro won only 4 times thereafter to finish 6th and 13 points behind champions Spurs.

Woke up this morning in Huddersfield  to a 4 inch covering of snow on the lawn and picturesque  white hills.  Outside temperature, because of the wind chill, is about minus 3 degrees.

Huddersfield’s ground, as the crow flies, is only about a mile from home and so will have had a covering of snow subject to the under ground heating.

The local football games are  likely to be postponed.

Been outside and it was freezing and windy  but I understand that it could be worse around Teesside.

I expect the foreign players will today  all be wearing gloves and perhaps a bit more in the way of thermals - I’ve noticed an increase in other players wearing gloves at the slightest sign of cold.

I remember refereeing and , as much as I wanted to wear gloves, resisted the temptation in case the players thought I was soft.
However at a renowned cold area  near here,  the home team , in very cold weather , wore a vest and a bin bag with holes cut out so they could get their head and arms through- underneath their shirts and always asked to ‘ change round’ at half time and not bother about a half time break.

Those were the days !!

Team News: Just one change with Dijksteel replacing Peltier, who isn't even in the squad so probably injured. 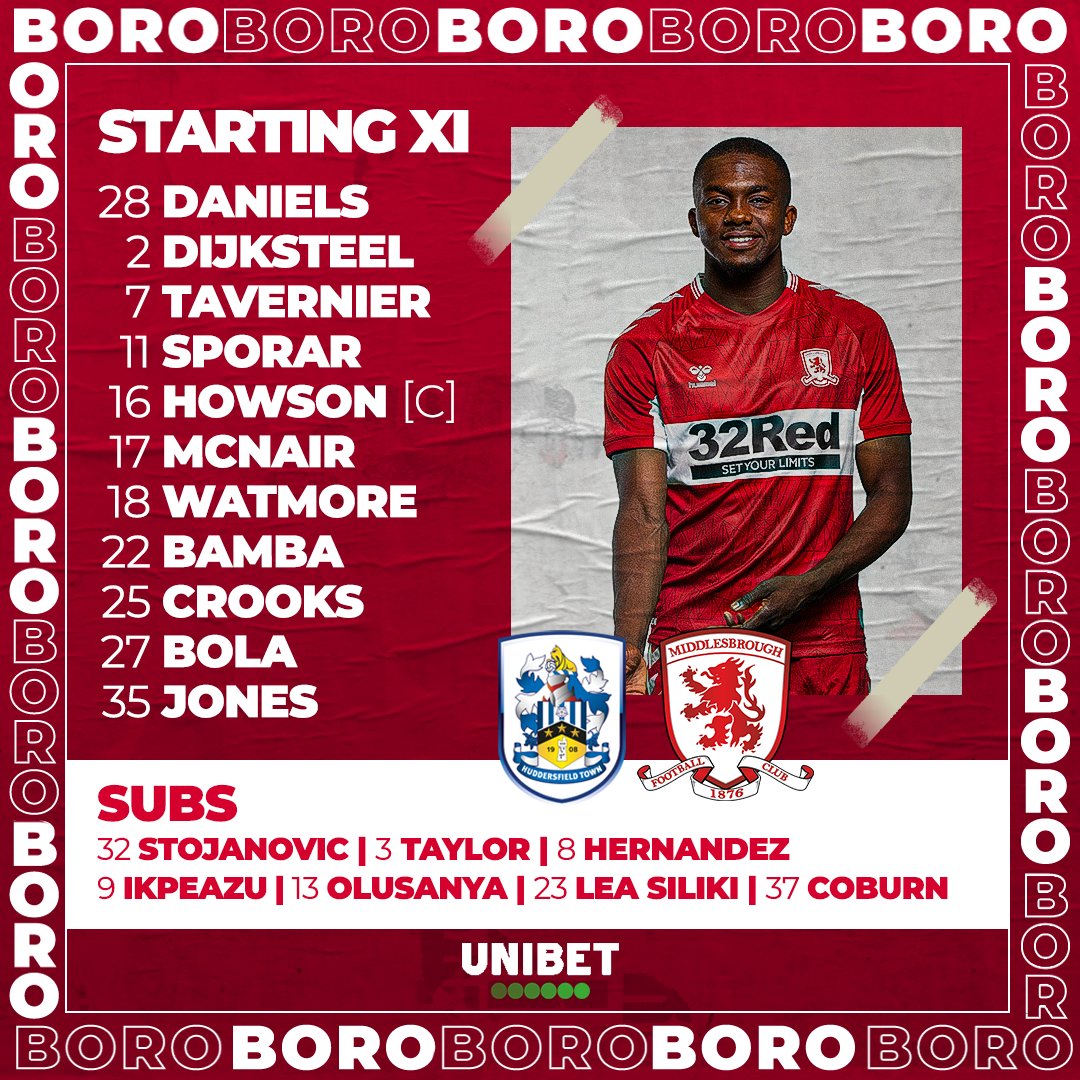 Newcastle rooted at the bottom of the premiership! Made my day. 😆

Newcastle rooted at the bottom of the premiership! Made my day.

Sorry Malcolm, no Schadenfreude from me as wouldn’t want them in the Championship next season along with Boro as it would make promotion much more difficult.

This post was modified 2 months ago by Ken Smith
ReplyQuote

Just realised this match has been chosen for International broadcast so no video stream from the Riverside. ☹️😎

Duncan Watmore gives Boro the lead in the 16th minute from a cross by Isaiah Jones.  🙂

Things are looking up - for now!

Liked by K P in Spain and David in Cumbria
ReplyQuote

I wish it was the second half...

@john-richardson. I wish it was full time! 🤣😎

Liked by John Richardson and David in Cumbria
ReplyQuote

Well that was a perfect away performance as Boro controlled possession and kept it simple and passed Huddersfield to death before creating openings that Watmore finished superbly on both occasions. Now that was certainly the team performance Chris Wilder was looking for and the home crowd not only silenced but on their team's back as they booed them off at half-time.

Now let's see if Boro can avoid their usual second-half performance and if they do then we could yet be in for a decent season!

Another dominant first half performance from Boro, this time with two goals. Beauties, both of them.

That was nearly easy for the first half. Even better first half than the first two matches under Wilder.

Howson been excellent all game and gave the ball wide to Jones, who's one-touch centre found Warmore. A beatiful goal.

Second a ball behind the defence by Crooks found Watmore who put the ball beatifully over the keeper to the empty net with his first touch.

Huddesfield have been very tame in the first half  because Boro have played so well. The Terriers were booed off at half time but it was Boro who made them look average.

OFB is correct with the score so far. Up the Boro!

Thanks, but can't see it, Werder

Newcastle rooted at the bottom of the premiership! Made my day.

Sorry Malcolm, no Schadenfreude from me as wouldn’t want them in the Championship next season along with Boro as it would make promotion much more difficult.

Never mind, Ken. The Boro is going up this season 😂. Just enloy the ride.

We look much wilder now as a team. Up the Boro!

Luke Daniels (OG) pulls one back for the Terriers in injury time. but thankfully, that was that:  1-2 & three yellow cards (Bola, Crooks & Paddy).

And Boro scored a third - unfortunately an own goal.

Hernandes pokes the ball against the his post as he was blocking a centre from the right, then to the chin pad of Daniels and goal. Two and half minuted of added-on time gone. Cruel. More than Huddesfield deserved.

Did the the Terriers have a shot on goal before that? A very well deserved win for the mighty Boro.

Sorry for OFB for the wrong predection and final score. But well done for the Boro!

Boro managed to keep their shape and composure in the second half and despite contriving to score yet another own-goal - thankfully it was only in the 93rd minute so they successfully saw out the game. Boro opted to play more on the counter foor that second half and probably could have forced a third if they'd been more decisive. Still a good team performance gave Chris Wilder his first victory and signs of the the new regime and methods taking shape and bearing fruit. Still it's a thin squad that is just about has enough quality to win games in the Championship once it stops making costly errors. Watmore, Howson and Jones the pick today but it was a team effort!

And finally from me, Peltier was absent because of a hamstring injury according to the English commentator on TV. Of course we do not how bad yet.

Without doubt the best Boro performance in the first half for a very long time, certainly before the Pulis and Monk eras. Clearly Wilder is starting to get his message across. I would be happy to see more of that type of football for the rest of the season even if it meant we were nowhere near the Play Offs, it's progress, entertaining and enjoyable to watch and we will win more than we lose with that attitude.

The second half we clearly tired but at least didn't crumble although had there been another ten minutes remaining when they scored I wouldn't have been so comfortable. We missed some great chances as well and I'm sure Wilder will have some comments to make about poor finishing and also taking too many touches but it's a work in progress.

Watching a performance like that will I suspect make SG a little more comfortable and confident in opening his cheque book in January. I thought Howson had a really good game with that one aberration apart when he was dispossessed in the middle of the park in the second half. Tav was very quiet and I suspect learning to play for the team rather than trying the spectacular but ultimately fruitless stuff. He will develop into a better player for it longer term.

Dijksteel looked solid and strong and I'm sure will have impressed Wilder and Sol was back to his best. Paddy was solid and I though unlucky to pick up a yellow along with Crooks, both looked harsh to me although Bola's was fair enough.

The penalty shout was a good one and up until that point I though the ref was having a decent game then seemed to lose it a bit towards the last fifteen to twenty minutes. I suspect he felt that our protests for the Penalty were unfounded and became a tad petulant afterwards.

Crooks overall looks a really sound investment and I suspect will be a Wilder favourite as he shuffles his squad, Sporar apart from some poor decision making around the goal mouth done the hard yards and worked his socks off. All in all a good performance with more positives and negatives to take back to Rockliffe and refine further.

Best bit of the afternoon for me was Wilder going over to the fans and encouraging Leo to take some of the plaudits with plenty of hugs and back slapping. That to me tells a very important story about things behind the scenes.

@werdermouth. Thanks for the link Werder, I managed to watch all of the second half.

Whilst we didn’t score again (own goal apart) we at least looked quite comfortable operating a containment policy and looking to counter attack. The passing and movement was very good and hopefully we can continue to progress and get stronger as injured players return.

Looking forward to seeing the first half performance when the recording of the match becomes available.

Howson/Watmore MoTM for me albeit it was a very good  all round performance from the team. 😎

It’s an absolute pleasure to see Boro passing and moving, that way football should be played as opposed to the “keep your shape and hoof it” stuff we’ve seen for far too long.

The signs were there in the previous two games and I’m pleased for Chris Wilder that he methods got their reward today.