Just read the article and looks like we won't see Akpom play until after the international break now as his knee injury has been upgraded to four weeks. Though what was interesting is that it doesn't sound like Wilder is looking to either Hoppe or Forss to lead the line anytime soon - with the former labelled 'a young project'.

Plus Wilder is still expecting to sign another striker but who that will be still remains a mystery with five days to go - as I earlier mentioned Emil Riis is yet to get off the mark this season after five games so doesn't sound like he'll guarantee goals. Jorgen Strand Larsen has one goal and one assist after three games, so maybe a better option out of the two if Groningen opt to sell.

Also news that Cheslea are open to loaning out youngster Ethan Ampadu and Middlesbrough appear keen - he can also play defensive midfield as well as centre-back so could provide cover for left centre-back.

Notice that Sunderlan FC confirm that manager Alex Neil is talking to Stoke about the managers job. If I was Neil I wouldn't leave Sunderland.

Just wanted to say I like the new look of our blog and thank you.  I am assuming it is down to you. 😎

Where has the like button gone Werder! lol or is it me Cheers

Also just noticed that to 'Like' a post there is a 'thumbs up' icon in the bottom right corner of that grey box that includes the poster's name and Avatar - you then have to choose the blue thumbs up as there's a red 'thumbs down' as well, which I'm not a fan of.

see my Admin message - This is what I just discovered!

Also just noticed that to 'Like' a post there is a 'thumbs up' icon in the bottom right corner of that grey box that includes the poster's name and Avatar - you then have to choose the blue thumbs up as there's a red 'thumbs down' as well, which I'm not a fan of.

see my Admin message - This is what I just discovered!

@werdermouth   Hoppe played a full game for the under 23’s tonight, along with Boyd-Munce. So I cannot see either on the bench tomorrow.

…and Hoppe scored two goals which is nice to see. Boyd-Munce also put one in with ‘ an inch perfect chip’ according the the website. The U21s are on fire at the moment and scoring for fun.

wilder doesn’t seem to be a big fan of young players in the first team but we do seem to have some serious talent bubbling under.

I do not like the thump down button, too. But at least the ↪️ reply button is working again. Up the Boro!

Good one OFB and well done Werder for sorting out the WordPress 'improvements'. I think it is constant updating to prove they are there and working!

Today no forecast from me, I'm staying out of the prediction game but if this isn't too dangerously near a prediction I hope Boro finally win a game. OFB reckons so or as Picard would say "make it so". Here's hoping.

Having been starved of watching Boro for 18 months during my National Service days, as a consolation whilst stationed at RAF Padgate I watched First Division football at Old Trafford and Goodison Park in alternate weeks as a friend brought his lambretta from Middlesbrough during our first 24 hour pass, also seeing Brian Clough scoring a hat trick at the City Ground where Boro beat Forest 4-0. I missed Boro beating Swansea Town 6-2 who had the two Allchurch brothers in their side who also became stars in the Wales team that reached the Quarterfinals of the 1956 World Cup in Sweden, and sadly never saw them play as Ivor signed for Newcastle and Len for Sheffield United after the World Cup finished.

Back home in Blighty in August 1958 I also missed the 9-0 thrashing of Brighton on the opening day of the season as I was awaiting demob in Innsworth in Gloucestershire, so strangely had never seen Brian Clough score a hat trick at Ayresome Park. My mates and I were convinced that Boro would be promoted, but Boro then went 9 matches without a win from mid-September before beating Scunthorpe 6-1 and Derby 5-0 in consecutive home wins.

Nevertheless there was much speculation on Teesside whether Clough could emulate George Camsell’s 4 goals against Swansea in 1926 when Boro won 7-2. Well almost as Boro again won 6-2 as Cloughie scored 4 before wee Willie Fernie scored the 5th and Bill Harris made it 6 from the penalty spot. All in all though it had been a disappointing season as Boro finished mid table.

However Boro’s scoring sequence at home to Swansea during the mid-50s and throughout the 60s was quite exceptional as they scored 40 times in only 12 matches and only lost once. Nevertheless many of us would take any win this afternoon to start the ball rolling and hopefully a playoff finish.

This post was modified 5 months ago by Ken Smith
Liked by Malcolm, K P in Spain and werdermouth
ReplyQuote

Clarke starts in defence but Muniz is only on the bench - looks like McGree back at number 10 with Watmore leading the line. Midfield of Howson Mowatt and Crooks with Paddy back at Right-Back. Unless Wilder has changed his system... 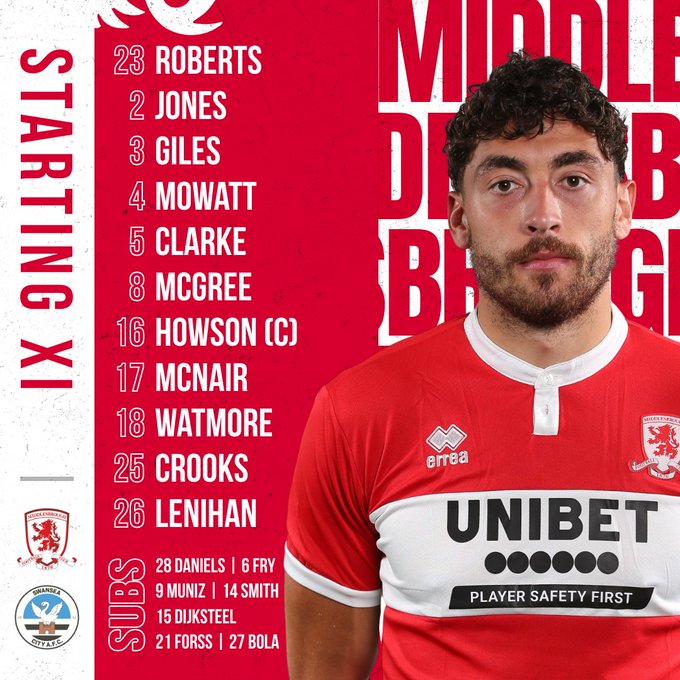 Liked by jarkko, Malcolm and K P in Spain
ReplyQuote

I hadn't even spotted Steffen was missing 😀

McGree gives Boro the lead in the 14th minute with a little help from Matt Crooks.  Now, can they build on that/prevent a Swans reply:  *prays*

As Vic saw it:

McGee [sic] clinically slots home past a rooted keeper after latching on to a well-weighted through ball by Matt Crooks.

This post was modified 5 months ago by Stircrazy
Liked by Malcolm, jarkko and K P in Spain
ReplyQuote

This post was modified 5 months ago by Stircrazy
Liked by jarkko, K P in Spain and John Richardson
ReplyQuote

So far so good.

Same again second half please or at least a clean sheet for Roberts.

Nice tribute before kick off for Spike. CoB 😎

Vic's assessment of the first half:

Polished Boro good value for their lead. Two well-worked goals plus a few moments a fraction away from adding more. Clarke has had an excellent first 45, two big tackles, a neat pass to set up 2nd, working well with Giles. Good stuff.

Things finally starting to come together for CW?  Let's hope so.  Boro currently up to 18th in the league.  On a sourer note, Alex Mowatt picked up a yellow card for a "bad foul" in the 27th minute.

Crooks has also started his new yellow card collection. I wonder if he autographs them?

Boro look solid at the back (Clarke adding some balance?) and are breaking quickly. Some excellent searching passes out to spark raids. Bright going forward. Swansea have had one chance but Obafemi shot weak. Enjoyable stuff.

Watmore off injured ( 🙁 ) in the 57th minute, replaced by Muniz.

Off topic, the Tigers appeared to have unearthed a gem of a striker, the Colombian, Óscar Estupiñán, who's bagged a hat-trick against Coventry.

Liked by Malcolm, jarkko and K P in Spain
ReplyQuote

The Swans pull one back in the 79th minute:  penalty awarded for a questionable (according to Vic) handball by Lenihan, converted by Joël Piroe.  🙁

after EIGHT official minutes of injury time, but ten more like, & three more yellow cards for the collection, for Robets, Jones & Lenihan!

Well a comfortable victory for Boro... not! Can't believe Boro ended up hanging on for three points as they were completely in control until the 75th minute and then got edgy and Howson gave away a soft penalty and in truth I feared the worst. Thankfully, Swansea lost their heads and got a man sent off and that left the Boro players to make the game messy and see it out.

Good first half with some good moves and Clarke had an impressive debut and Crooks had an excellent game too and showed what he and the team have been lacking. Giles also looked good and McGree took his goal well with Jones also looking more dangerous going forward with the support of Crooks.

I thought McNair was pretty anonymous for most of the game and am still disappointed to see Dijksteel sitting on the bench as he was part of that gang of three down the right with Jones and Crooks. Perhaps Clarke, Giles and Mowatt could do the same down the left as Chris Wilder's side are starting to take shape.

In the end it was all about the three points and while it should have been done and dusted much earlier Boro never choose the easy option. Thankfully, Boro up and running and indeed only three points off the play-offs in a Championship with no clear stand-out teams as yet.

Phew a win good first half second half bit of a mess was there 8 defenders on the pitch at the end. Clarke impressed me

This post was modified 5 months ago by PaulInBoro
Liked by 4 people: David in Cumbria, Pedro de Espana, Malcolm and werdermouth
ReplyQuote

@werdermouth.  Good summary and rather ironic that in a match where we have less possession than the opposition (unlike Stoke and Reading) we win!

Perhaps there is a lesson to be learned! 🤔😎

Great pass to set up Giles to cross for the second.  Proves the point about square pegs.  If Paddy had been playing on the left I don’t think that pass to Giles would have been on. 😎

This post was modified 5 months ago by K P in Spain
Liked by 4 people: David in Cumbria, Clive Hurren, Pedro de Espana and werdermouth
ReplyQuote