The latest in a series of profiles and interviews, Orginal Fat Bob gives his personal view on the life and career of a footballing guest, before sitting down for a chat and asking a few questions. Our Diasboro special guest this week is Archie Stephens.

1. The Overview – the man and his career

Arthur, or better known as our own, Archie Stephens, had played 127 times for Bristol Rovers, scoring 40 goals before moving North to us at the Boro. He had been picked up by Terry Cooper at Bristol Rovers from non-league football club Melksham Town. When Archie joined us in 1984, he made up a two-pronged strike force with Bernie Slaven. During our post liquidation period, Archie made over 92 appearances for Boro and scored over 24 goals, however, it should also be noted that he also made a lot of assists for his striking partner, Bernie Slaven.

He is just under six feet tall, but always gave the appearance of being taller on the playing field and could outjump most players, Now, in his early sixties he looks today like a man that you wouldn’t mess around with and some ten years younger than his age. After leaving Middlesbrough he later went on to play for other local teams Carlisle United and Darlington before finishing his career at Guisborough Town. Admired by the Boro fans and respected by opposing defenders he has even had a record made in his honour, “Archie Stephens Birthday Party by Shrug!” 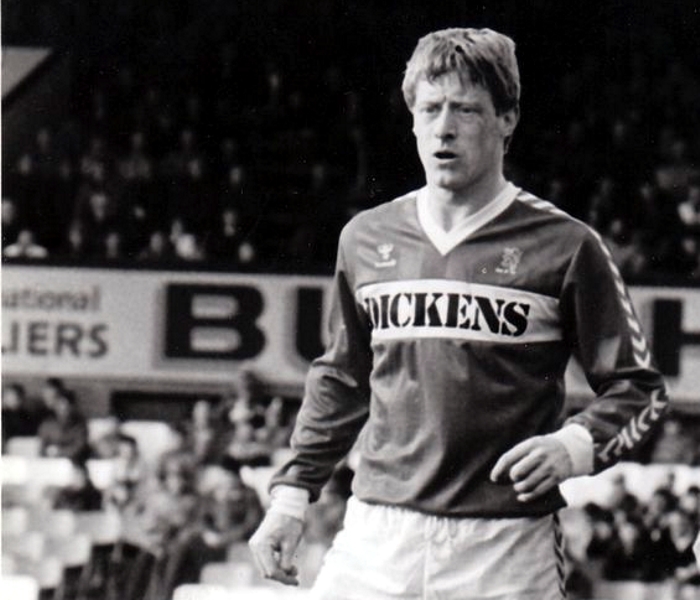 When his striking partner Bernie Slaven spoke about him to the Gazette, he said “I’d just moved down to England and he showed me how I needed to play, to adapt to the league and the game. He was probably a couple of inches shorter than me, but he could jump about 10 times higher. When he was up in the air he used to hover, and hang there like a kestrel. We struck up a good partnership and scored 33 goals between us in Division Three, when we got promotion, the season after liquidation.”

Bernie and Archie are still good friends and regularly travel to see their old team mate, Gary Parkinson who suffers from locked in syndrome.

2. The Interview – a quick chat

OFB: What year did you join Boro as a professional footballer?

OFB: Where did you stay? Did you rent, or did you live in digs?

AS: I lived in the Stork Hotel at Stockton On Tees.

OFB: Who was your favourite Boro player and others that you have played with?

AS: I must say that all my team-mates I played with in 1986 were my favourites and still are. I also played with Gary Mabbut at Bristol Rovers, who was one of my favourite all time footballers.

OFB: Who were the best and worst trainers in the team?

AS: Me and Gary Pallister were the worst trainers in the Boro team! Gary Gill and Bernie Slaven were always the best trainers.

OFB: When did the team travel for away games, how did they get there, by bus or by train?

AS: The team travelled by bus on Friday afternoons, especially if we were going on long journeys like London.

OFB: How many players usually travelled and did the Directors travel with you?

AS: There were about 15 players who travelled on the bus and no Directors ever came with us.

OFB: Did you have nice hotels or was it just bed and breakfast?

AS: Oh yes, we always stayed in nice hotels, never any cheap ones, or bed and breakfast.

OFB: Who did you room with for away matches?

AS: I always roomed with Paul Kerr.

OFB: Who was the joker in the team?

AS: There were quite a few jokers in the pack, nearly all footballers have a good sense of humour.

OFB: Can you tell us any amusing anecdotes or pranks that were played?

AS: The favourite trick of the other players, was getting your hotel room turned over and wrecked whilst you were out and then leaving you on your own, having to explain all the mess afterwards!

OFB: Whose boots did you clean as an apprentice and who cleaned yours?

AS: I come from a non-league background, so I wasn’t an apprentice and I didn’t clean anyone’s boots. I’m afraid I can’t remember the apprentice that used to clean mine.

OFB: Did you try and emulate your style of play, on any individual player who played in your position?

AS: No, there was no one that I tried to copy, I just played my own game, my way.

OFB: What was your most memorable game, your own individual performance and best experience with the fans?

AS: My most memorable game was the first game of the season, Boro against Port Vale when I scored 2 goals. My best experience with the fans was when we played at Doncaster All the fans surrounded us and were at the edge of the pitch waiting for the game to finish. When the final whistle went, they all invaded and stripped me of all my clothes except my underpants!

OFB: What was your worst game or experience and why?

AS: My worst game and experience was when I was playing for Bristol Rovers and we were away at Millwall. I was sent off and when I was going to the dressing room, I had to run down the tunnel where all the Millwall fans were. So, I had to run past them all and they were all shouting at me. To make matters worse, I ended up getting fined as well.

OFB: Is there a game that you wished you had played in, either for Boro or another team?

AS: It has to be for me, the 1965 FA Cup final, playing for Liverpool who won it for the first time against Leeds. It wouldn’t have been possible of course as I would only have been 11years old at the time, but I can still dream.

OFB: Who was in your opinion the best manager that Boro have ever had and why?

AS: It has to be Bruce Rioch, because 1986 was the year that changed everything within Middlesbrough Football Club forever and look where they are now. It wouldn’t have been possible without Bruce Rioch.

OFB: Who was in your opinion the manager that had the greatest influence on your career and why?

AS: Without a doubt it was Terry Cooper, who signed me from non-league football and changed my life forever. He was a big influence on my professional footballing career, no matter how short it was.

OFB: Which opposing team and which player did you fear playing against?

AS: I didn’t fear no one! (No other comment required is there? OFB)

OFB: Which opposing team and which player did you like playing against?

AS: At Millwall they had a centre half called Dave Cussack and we used to have some good battles. That’s who I got sent off against at Millwall, when I mentioned having to go past all the fans.

OFB: Who is your favourite Boro player of all time and why?

AS: Tony Mowbray was and still is great reader of the game. He encouraged everyone around him and was an outstanding player as well.

OFB: Who is your current favourite Boro player and why?

AS: I don’t really have a current favourite player at present.

OFB: How do you think the match day has changed from the time that you played professional football to the present day?

AS: I couldn’t play now because the physical contact has gone out of the game which the fans liked to see. The ball is lighter and football boots are like slippers. Oh, and the main reason I couldn’t play now, as you also need a designer haircut, which I don’t have! (laughs OFB)

OFB: If you could be a fly on the wall, is there any dressing room you would wish to eavesdrop on?

AS: I would like to be in the Everton dressing room, so I could go back to the Liverpool dressing room and let them know what was being said

OFB: Do you have any regrets in your career, or missed opportunities?

AS: I wish I had been picked up earlier as a professional footballer. It’s an amazing life doing something you love and getting paid for it.

OFB: Do you still follow the Boro and their results

AS: Yes, I religiously follow their results at every opportunity.

OFB: Whereabouts in the Country do you live these days and what do you do?

AS: I live in Great Ayton, just outside Middlesbrough and I’m counting down the years for retirement.

OFB: Whom have you made a lifelong friend through football?

AS: My best friends are; Terry Cochrane and Bernie Slaven.

OFB: During our talk you mentioned being associated with our new manager Tony Pulis. What was his role at the club? Did he influence your career, and did you think then he would go on to be a great manager?

AS: When I arrived at Bristol Rovers Tony Pulis was not there. He was playing in a Hong Kong League. The club arranged a house for me which happened to be Tony’s. When Tony came back from Hong Kong he re-signed for Bristol Rovers, and was working with the 2nd team. I played a few games with Tony in the 2nd team, he was a bit of a handful as a player. As a coach you don’t know how far they will go. He didn’t have any influence on me.

OFB:  Do you think Tony Pulis is the right man for the Boro and what can we expect to see from him?

OFB: Finally, if you hadn’t had a professional career as a footballer, what do you think you would have done as a career?

OFB: A huge thank you Archie, for taking the time to provide an interesting talk with me at Diasboro and giving our readers and bloggers worldwide, an insight into your life at Middlesbrough Football Club.